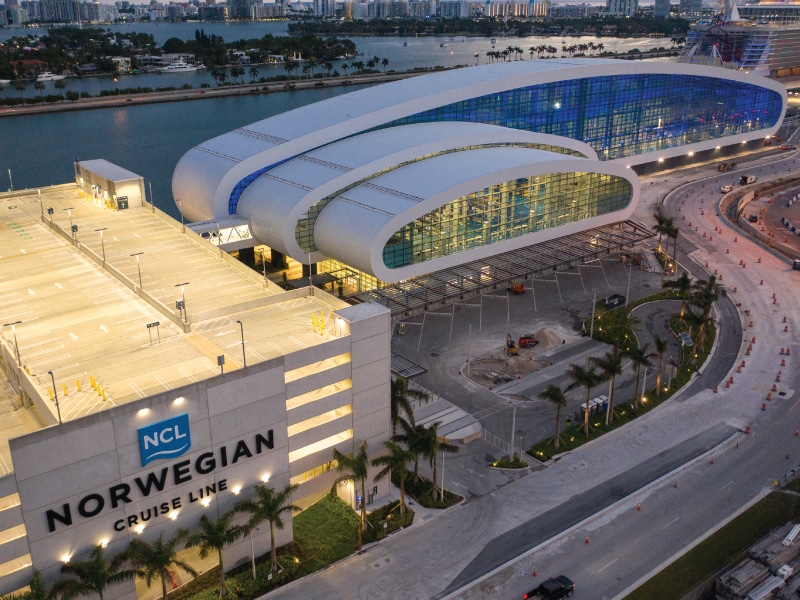 Hypower’s complete electrical systems and related work on the prestigious Norwegian Cruise Line Cruise Terminal B has won the ENR Southeast 2021 Best Project Award in the Airport/Transit category. The 546,757-square-foot and $232 million modern flagship terminal unites function and form and is an iconic, state-of-the-art landmark on the Miami skyline.
The project includes a new terminal building with all back-of-house operations for security, baggage handling and screening, and ground transportation areas for buses, rideshare, and personal vehicles. The project also boasts a multi-purpose provisioning building for supporting ship operations, waste disposal, and general provisioning. This building houses the main MEP systems, such as main switchgear, emergency generator, HVAC chiller systems, and communications backbone. An 809-space precast parking structure is also included.

The terminal is able to accommodate ships with up to 7,000 passengers, feature indoor and outdoor waiting areas, faster embarkation and disembarkation technology, expedited security screening and valet area, and lounge. The terminal has a transparent structure to allows visitors to get great views of downtown Miami.  The 189,730 SF cruise terminal, which will earn LEED® Gold designation, consists of 8,221 tons of structural steel with a façade of more than 110,000 SF of curtainwall glazing. Completed on an active cruise ship active berth and requiring coordination among 12 different permitting agencies, the project also includes a 340,730 SF parking garage and 16,297 SF warehouse. The new terminal is expected to create 155 new full-time jobs.

An independent panel of jurors chose Best Project Award winners in 15 categories from roughly 95 entries. Winning projects are automatically entered in the national competition and will be judged against the winners from all regions by a jury comprising construction industry professionals from across the country. Watch for the winners of the Best of the Best Projects Award to be recognized in a special editorial feature in Engineering News-Record, in which one project will be highlighted as Editors’ Choice, selected by the editorial staff of ENR.

Hypower is proud to have been a part of NV2A-Haskell, Joint Venture team for this stellar project!