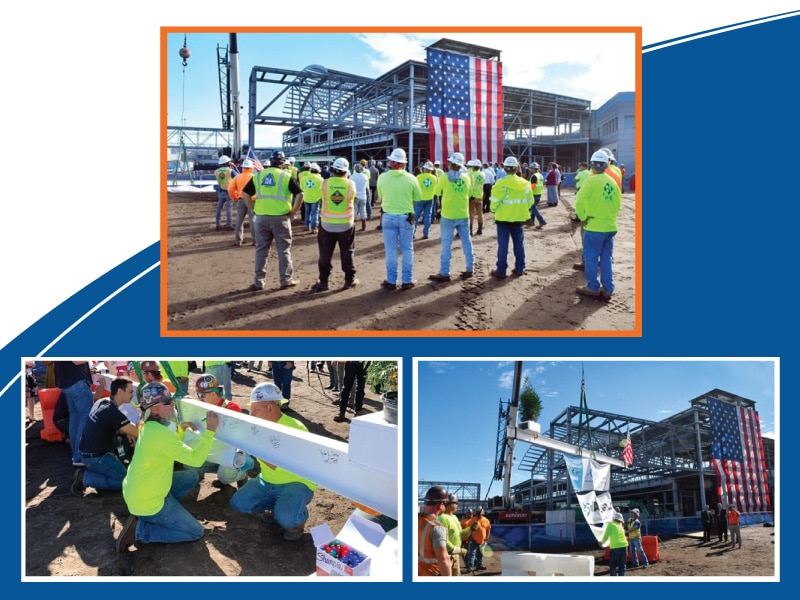 Hypower’s project at the Melbourne Orlando International Airport (MLB) in the US has marked a ‘major milestone’ by topping out its $72m terminal renovation and expansion. Wednesday morning, dozens of dignitaries and construction workers used colorful Sharpie pens to autograph a white-painted metal beam outside the Melbourne Orlando International Airport passenger terminal.

The 86,000-square-foot, multistory MLB terminal expansion is scheduled for a ribbon-cutting ceremony ahead of TUI’s March 7 first flight. The U.K. travel company is projected to fly in about 150,000 passengers during its inaugural year in Melbourne, operating two or three Dreamliner flights a day.

Donovan said TUI passengers spend an average of nine nights at their destination areas, spending about $3,200 each.

Dating to 1989, MLB’s passenger terminal measures just more than 200,000 square feet with six domestic gates and one international gate. The expansion will add three new gates that can accommodate domestic and international flights, along with a:

The project also includes updates to the airport atrium and ticketing areas, along with four new sets of restrooms. Airport-generated funds and grants are financing the project, not taxpayer funds.

“Our $72 million investment will provide decades of return for the community, for our region. And the airport (has) a proud moment right now to see this project take shape,” Donovan said.

The cost of the terminal project increased from $61 million to $72 million because of shortages in manpower and raw materials, Airport Finance Director Mike O’Dell told the Melbourne City Council earlier this month.

In May last year, MLB appointed a team consisting of Haskell, RS&H and Kinley for the design and development of the airport’s design/build project. Hypower is proud to be a part of the team!

Haskell infrastructure and transportation president Peter Kinsley said: “This project has reached an important construction milestone through unprecedented challenges. This is a testament to the outstanding teamwork and collaboration from all project stakeholders, working together to deliver this exciting project for the airport and the surrounding community. As an organization whose purpose is to create things that matter, we are grateful and proud to serve the Melbourne Orlando International Airport in this important work.”

This terminal renovation and expansion project intends to establish MLB as ‘the new coastal gateway to Central Florida for TUI, the world’s largest travel group and the UK’s number one holiday provider’ by March next year.

The new facilities are expected to handle the airport’s projected influx of 150,000 new international passengers during its initial year of operation.