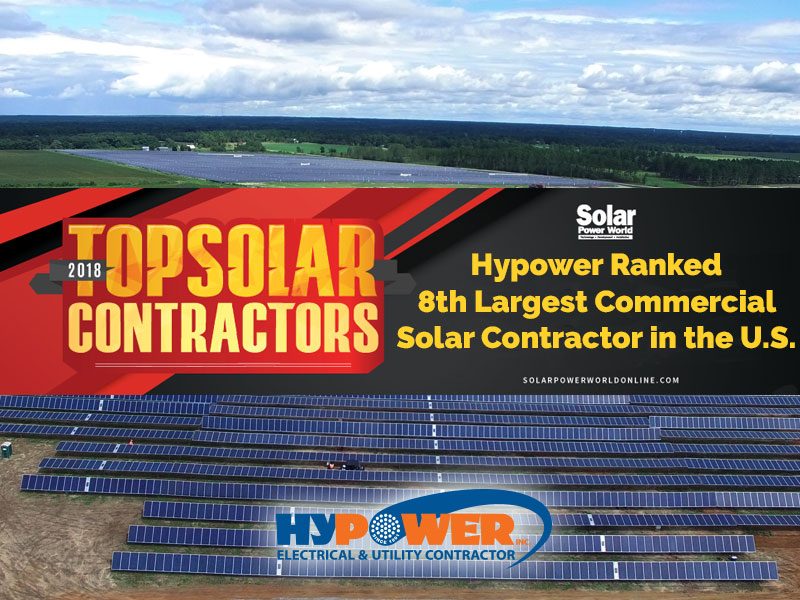 More than 10,600 megawatts of solar power were installed last year in the United States, and Hypower has been recognized by Solar Power World magazine for its contributions to the industry. On the magazine’s prestigious 2018 Top 500 Solar Contractors list, Hypower achieved a rank of 45 in North America and is listed as the 8th Largest  Commercial Solar Contractor in the United States. Hypower also came in at 5th place in the state of Florida rankings.

“Solar Power World is very excited about the 2018 class of Top Solar Contractors,” said Kelly Pickerel, editor in chief of Solar Power World. “Our 2017 list showed impressive installation numbers after 2016’s huge rush to meet ITC requirements, and many companies were hesitant to show unavoidable installation dips after last year’s high. We’re happy to feature a strong group of thriving U.S. solar installers on the 2018 Top Solar Contractors list. These companies truly are at the top of their markets.”

“This is our second consecutive year being ranked inside the top 10,” said Bernard Paul-Hus, president of Hypower “We are thankful for all of our commercial and utility solar customers and extremely proud of this achievement.” Hypower is an experienced utility scale self-performing BOS/EPC solar contractor based out of Fort Lauderdale, Florida. The company works nationally, currently licensed in over 30 states. “We are celebrating our 27th anniversary and since 2009 we have installed over 600 MWs of solar, focused solely on ground mount projects over 5 MWs.”, said Jim Zerby, Vice President at Hypower and in charge of the Renewable Energy Group. Ranked by ENR magazine as a top electrical and utility contracting company in the Southeast, Hypower works with some of the leading general contractors, utilities, developers, and institutions in the United States.

The U.S. solar market had its biggest year ever in 2016, installing more than 15,000 MW. Although installations in 2017 dropped to 10,608 MW, the total still represents 40% growth over 2015 numbers. The year-over-year downturn can be attributed to the large influx of 2016 projects rushing to meet the anticipated expiration of a 30% federal tax credit that was eventually renewed. Last year also saw uncertainty surrounding potential Section 201 tariffs on imported solar panels, which may have led to delayed or canceled projects.

A major highlight of 2017 was the non-residential market growing 28% year-over-year, the fourth straight year of annual growth for commercial, industrial and community solar.

Hypower has long been widely recognized for its culture of innovation and industry excellence. It was named a 2017 Business of The Year and a 2018 Healthiest Employer by the South Florida Business Journal, received six 2017 Excellence in Construction Awards by Associated Builders and Contractors, Florida East Coast Chapter, and was honored with an ABC STEP Platinum Award for Safety Training by Associated Builders and Contractors, Inc. in both 2016 and 2017.

Solar Power World is the leading online and print resource for news and information regarding solar installation, development, and technology. Since 2011, SPW has helped U.S. solar contractors—including installers, developers, and EPCs in all markets—grow their businesses and do their jobs better.