On Sunday, September 17, 2017, Hypower’s emergency response team received a call from Sandoway Discovery Center. The facility was still without power after Hurricane Irma, and while they had backup power, they weren’t getting enough power to sustain Sandoway’s famous sharks and other creatures.

Hypower, techs Camilo Lueiro and Frank Navarro, along with John Potts, the local representative of Kohler Generators, went to Sandoway. TAW donated a 65KW generator, and Hypower wired it to the electrical service of the building. Sandoway was up and running within one hour, and all species were safe. All services were provided free of charge.

Hypower’s lead electrical engineering tech, Danny Kaddoch stated, “Sandoway Discovery Center was not an exception, we pride ourselves in providing rapid response to any urgent service and repair needs of local businesses, commercial and industrial sites.”

Hypower, offers a two-hour response window for emergency calls, and the company’s techs are serious about making it on-site as fast as possible. Hypower, has become known for its professionalism and dedication to the community. With the company’s 24/7 commercial service, restaurants, universities, schools, stores, apartment communities, and other commercial clients can receive various emergency electrical services quickly to ensure uptime. The company organized a dedicated Disaster Recovery unit that focuses on getting local businesses up and running fast after hurricane Irma stormed through South Florida. 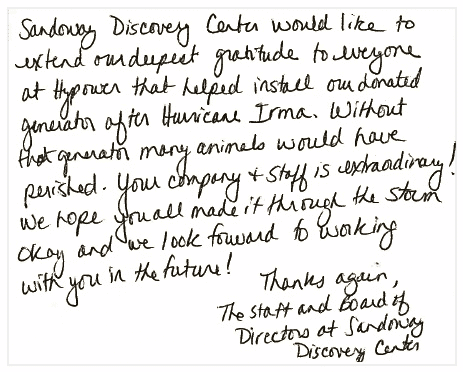 In 2016, the company sponsored the Guy Harvey Research Institute’s initiative to tag sharks with satellite devices and then research their actions. In doing so, Hypower, got to name a female Mako shark off of Ocean City, Maryland. Earlier this year, the shark named “Hypower” was tracked 5,000 miles to the coast of South Florida.

The team at Hypower, was proud to help save the lives of the sharks at Sandoway, as well as the other natural life found there. Sandoway management was extremely thankful and shared their excitement in this Facebook post.

Hypower, based in Fort Lauderdale Florida, is a top ten Electrical and Utility Contracting Company servicing the State’s leading General Contractors, Utilities, Developers, and Institutions. Hypower operates through several divisions that specialize in Electrical Building Construction, outside plant power and communications projects, prime electrical infrastructure, airfield lighting and ground-mount solar nationwide. Hypower also specializes in 24/7 commercial and industrial electrical service and repair in South Florida. Founded in 1991, Hypower has completed successfully over 1,000 projects valued at over $1 Billion and consistently ranks at the top of their class nationwide for exemplary safety record (ABC 2016 Platinum STEP Award recipient), attention to employee and public safety and job site accountability. In May 2017, Hypower was named Business of The Year by the South Florida Business Journal. Hypower is a family-owned company which currently employs over 400 people.  For more information visit https://www.hypowerinc.com. Follow Hypower on LinkedIn and Twitter.