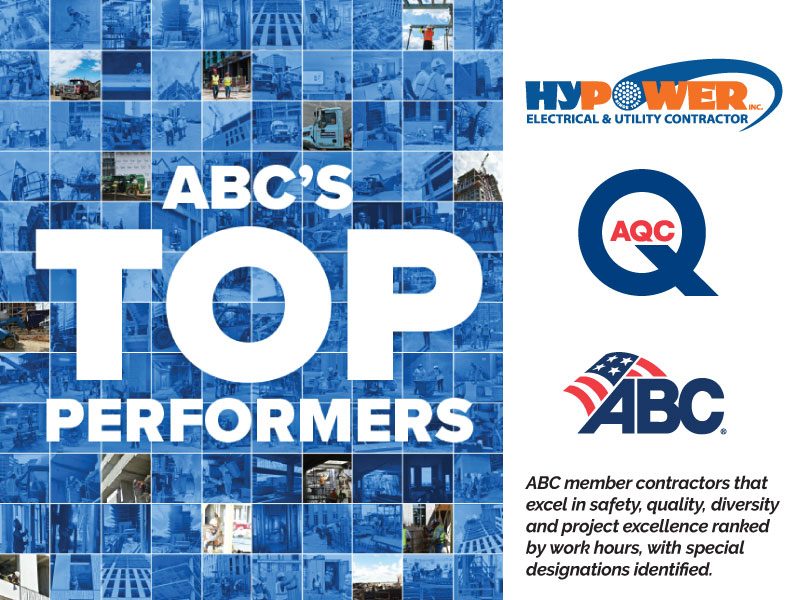 WASHINGTON, June 28, 2019 — Associated Builders and Contractors named Hypower one of the companies on its 2019 Top Performers lists, which recognizes ABC member contractors’ accomplishments in safety, quality, diversity and project excellence ranked by work hours, with special designations identified. Published as a supplement to Construction Executive magazine, the lists identify the Top 150 Performers, Top 50 Performers with Special Designations and Top 20 Performers by Region.

To be considered for the title, Top Performers must have implemented ABC’s STEP safety management system, which makes the top-performing contractors up to 680% safer than the U.S. Bureau of Labor Statistics industry average, according to the ABC 2019 Safety Performance Report. The companies are ranked by size based on the number of hours worked in 2017, as reported in their 2018 STEP applications. Michael Bellaman, president and chief executive officer of ABC, says “These rankings will help the industry identify contractors that have achieved world-class safety performance, demonstrated their commitment to their workers and their communities, and earned recognition for project excellence and diversity.”

Hypower has long been widely recognized for its culture of innovation and industry excellence and continuously ranks at the top of its class nationally for its excellent record of safety and innovation within the construction market. The family-owned company currently employs more than 400 people and has completed over 1,000 projects valued at over $1 billion. Additionally, Hypower is the 8th largest commercial solar contractor in the U.S., as well as the winner of the specialty contractor project of the year and the 5-eagle awards winner in 2018, and has installed more airfield lighting than any other contractor in the U.S. Hypower received ABC STEP Platinum Award for Safety Training in 2016, 2017, and 2018.

The listings highlight contractors that have earned ABC’s Accredited Quality Contractor qualification (that Hypower received in December), for their devotion to corporate responsibility in quality, safety, talent management, education, community relations and diversity; those that won national Excellence in Construction, Safety Excellence and Diversity Excellence awards; and those that hold designations awarded to diverse companies to help acquire work from government and private entities.

Ranked by ENR magazine as a top electrical and utility contracting company in the Southeast, Hypower works with some of the leading general contractors, utilities, developers, and institutions in the United States. The company operates through several divisions that specialize in electrical building construction, outside plant power and communications projects, prime electrical infrastructure, airfield lighting, and ground-mount solar nationwide. Hypower also specializes in 24/7 commercial and industrial electrical service and repair in South Florida. Founded in 1991 and headquartered in Fort Lauderdale, Florida, Hypower was named a 2017 Business of The Year and a 2018 Healthiest Employer by the South Florida Business Journal. For more information, visit https://www.hypowerinc.comand follow Hypower on LinkedIn and Twitter.